How to choose the hood 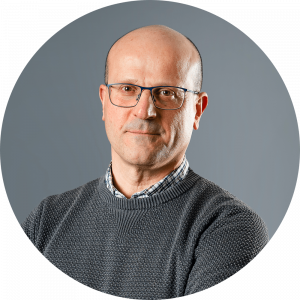 We left a few weeks ago with the general characteristics for choosing a kitchen hood that allows you to obtain optimal living comfort and not waste precious resources for heating the environment in which it is inserted.

Now let’s see in detail how the right hood should be.

Vapors and odors should be aspirated where they develop, therefore on the hob, directly from pots and grills.

The more the cooking vapors spread in the air, the more smells and grease settle in the surrounding environment, particularly on furniture and fabrics with the result that, for days, we carry the smells of fish, roast, braised meat on us.

With the suction from the hob, however, the fats produced during cooking are captured in the stainless steel grease filter. While for odors at the end of cooking, simply close the suction system and they will remain trapped in the filter.

One parameter above all explains well the difference compared to traditional hoods: the “CLEANRATE”, that is the regulatory system for measuring the efficiency of extractor hoods according to the international standard DIN EN 61591.

The suction technology directly from the hob obtains a 100% Cleanrate compared to a maximum of 60% obtained from the best traditional hoods.

These two videos demonstrate, better than words, the difference between the two suction systems.

Extraction with the hood integrated in the hob: 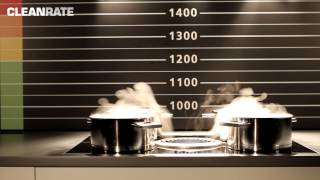 Suction with a traditional hood: 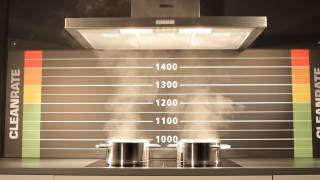 But the advantages do not end with the suction efficiency, because we can also briefly list:

1) The silence. By sucking in much smaller volumes of air, the noises produced by the suction motor are also drastically reduced

2) The freedom of design.

The hob can be positioned in front of a window, under sloping ceilings, in island kitchens without having anything left over your head or in traditional kitchens, creating more space for the wall units

4) Ergonomics. No more bending over while cooking, no more annoying steam at eye level, no fogging of the glasses.